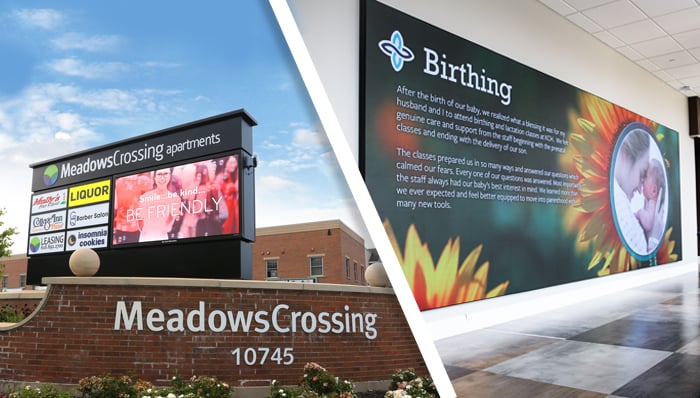 Since the evolution of LED technology, LED products are becoming increasingly popular. As a crucial part of advertisement and mass communication, LED displays are significant to the modern world’s business.

LED displays are excellent modern communication tools for businesses to speak to their clients. These displays also serve educational and awareness objectives. However, LED signs are purpose specific. It is not possible to use similar LED signage for both indoor and outdoor purposes.

There are two broad classifications of LED screen displays: Indoor and Outdoor. Both categories are different from one another in various aspects. We will be discussing each difference one by one:

Appearance is one of the obvious differences by which Indoor LED screen displays can be distinguished from their outdoor counterparts. Indoor displays are obviously smaller and widely used inside places such as worship places, offices, conference halls, restaurants, malls, and retail outlets. The larger one is for outdoor applications. Because of the larger size, they are often used as highway billboards, in stadiums and outdoor celebrations, just to name a few.

Since indoor environments are a lot dimmer, LED video walls need to only be about a fourth as bright as an outdoor LED sign. Video screens installed inside areas with a great deal of natural light can still be adjusted to compensate for additional environmental light, while those installed in darker areas can be dimmed to avoid being overpowering.

It’s also important to adjust any LED sign to the surrounding environment so that viewers are not straining their eyes to read it or put off by blinding brightness.

Outdoor digital signage needs to be designed to withstand all types of weather conditions. Indoor signage, however, won’t be exposed to the elements, so these protections (such as full silicone encapsulation, heavy wall extruded aluminum cabinets and rugged, fade-proof louver shades for example) are not necessary. By omitting these weather protections, manufacturers are able to produce indoor LED displays for far less than the cost of outdoor LED display production.

Indoor LED displays will often require higher resolutions than outdoor digital signage since they are intended for up-close viewing inside malls, churches, hospitals, or sports arenas. Indoor LED video walls may often be at ground or eye-level, so they need to have a clear, sharp display for foot traffic.

Outdoor LED screen displays are devices for wide range advertisement and communication. Because of this, they need to be seen from farther distances as compared to indoor counterparts and as a result, have lower resolution. Outdoor displays can never compromise visibility. Since the distance between the viewer and indoor LED screen is less, resolution needs to be high. The greater resolution promises for the best picture quality.

There is a lot of options available for design integration when it comes to indoor LED screen displays. Indoor screen displays can be styled and designed in several ways depending on the configuration and architectural needs. This is because they don’t require a cabinet for installation. It surely means that indoor LED displays are ideal for creative installation. Additionally, all assembly work takes place panel by panel on the actual site.

On the other hand, outdoor LED signs also feature versatility. However, they are not assembled panel by panel on the site. Rather, even the most creative Outdoor displays are shipped or transported in large units. The entire installation is according to the design as a sign or billboard or placed on a building.

After reviewing the differences between indoor LED displays and outdoor displays, you can now choose which type of sign would be best for your establishment.